Welcome to my annual Christmas Countdown Book Blast! During the month of December, I indulge in reading my favorite fiction: Christmas stories! So for the entire month and for The Twelve Days of Christmas, December 25 through January 6th, I will post a new book each day to help get you in the holiday spirit. That’s 37 books!  This is a combination of New Release Spotlights and the Christmas Countdown Blitz hosted by the lovely ladies at Loving the Book.  In addition, I’m offering free downloads of my Christmas short story Ino’s Love in ebook and audio. To claim your digital copy visit the book’s download page here. For an audiobook copy send me an email at mariannesciucco@gmail.com indicating whether you want a US or UK download code. Either way, you’ll be subscribing to my monthly newsletter where I feature book news and giveaways. You’re free to unsubscribe at any time. Happy holiday reading! 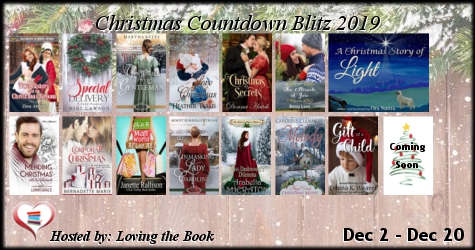 Erin O’Neal loves Christmas, except not this year because she’ll be all alone for the holidays. To make matters worse, she receives a dog as an early Christmas present, but cannot keep it. The man who delivers the dog is the snob who has embarrassed her in public a few days ago.

When the snob, a handsome veterinarian, injures his ankle and needs someone to drive him home to Prescott for the holidays, Erin is available. Getting to know him better, she falls in love with him. There are only two obstacles: his girlfriend and her own dog phobia.

While she still pondered the question of the elusive gift giver, she heard tires screeching out in the parking lot. “Crazy driver,” she mumbled as she turned her attention back to the Christmas tree. She might as well put on the lights. If someone should come by to claim it, he or she would have a ready-made tree. In the meantime, she could enjoy it.

A short time later, her doorbell rang. Hmm. She didn’t expect anyone, except perhaps the owner of the tree.

The light string dropped to the floor as Erin hurried to open the door. “P—P–Pierre,” she stuttered, but stopped short when she saw a small dog cradled in his arms and blood on his hands. She gasped.

“I need your help,” he said as he made his way to the kitchen. “Could you clear the table, please? Quick.”

“Laceration,” he said. “I need your help. Wash your hands with soap and hot water and bring some towels.” As an afterthought, he said, pointing to a box of latex gloves. “Put on the gloves when you come back.”

Another look at the poor animal laying on her kitchen table with blood oozing out of an ugly tear in its side, Erin’s stomach revolted. With her hand pressed over her mouth, she turned on her heels and made it to the bathroom in time. Her insides felt like mush, and she wanted nothing more than to run away and forget the scene from her kitchen. Yet, Pierre had said he needed her.

After a few deep breaths, her stomach settled somewhat. She washed her hands thoroughly and grabbed a few towels from the linen closet before venturing back to the kitchen. As she approached, she heard the little dog whimper in pain. Her heart lurched and pounded against her chest. Poor little fellow.

Pierre held the animal in place with one hand while trying to open his bag. When he saw her, he motioned for her to come closer. “Gloves,” he commanded. That done, he said, “Hold the animal steady while I prepare the anesthesia.”

“You can talk to him to keep him calm,” said Pierre.

She laid a hand on the dog’s head. “You’re such a sweet dog. I’m sorry, you’re hurt but the doctor will help you feel better soon.”

As soon as Erin glanced at the open wound, her stomach churned.

“Don’t look if the sight of blood makes you feel queasy.”

She nodded and looked away.

“Take a deep breath. Alright, now hold him still while I give him the shot. It’ll only take a split second.”

Erin looked at the syringe, saw Pierre spritz a tiny amount of liquid into the air before lowering it to apply the anesthesia to the dog’s neck. She squeezed her eyes shut and held on to the dog.

“You can open your eyes now,” said Pierre with a chuckle in his voice. “The deed is done.”

“What are you going to do now?”

“First, I need to shave around the wound.”

“He won’t feel anything.”

Pierre shaved the area around the wound before he debrided the skin. Several times, Erin turned her head to avoid looking at the exposed flesh. When her stomach tried to revolt, she took a few deep breaths to suppress the urge. Once or twice, Pierre looked up but didn’t say anything.

With the area around the wound clean, he took a tweezer-like instrument out of his bag to work on the fleshy part.

He pointed to a stack of gauze pads. “While I clean the wound, I need you to gently dab away any blood or fluid that may ooze out. Once the wound is clean, I’ll pull the skin together and suture the laceration shut.”

Pierre bent over the wound when his hand accidentally brushed her arm. Immediately, a tingling sensation like an electric current raced down her arm, creating a warm feeling throughout her whole body. Her heart skipped a beat only to hammer against her chest with renewed force.

When she closed her eyes for a split second to gain control over her feelings, Pierre’s command, “Dab,” pulled her out of her emotional confusion. With tweezers in hand, he removed small particles of skin and dirt, and Erin watched closely to be ready with the gauze before he even had a chance to call her to action again.

Before long, the wound looked clean. He put the instruments aside and pulled a vacuum-sealed pouch out of his bag containing the items for the suture.

Erin watched his confident movements, his concentration, but also his gentle touch. She admired his athletic physique, his muscular arms and lithe figure, but even more his expertise as a vet. Jess was right. He is quite a handsome specimen.

When he was almost done, Erin heard voices outside her front door. She looked up, puzzled.

“The boy and his mother,” explained Pierre.

“Why didn’t you have them wait in here?”

“The boy is only about six years old and I didn’t want him to see all the blood and gore. He was devastated when he watched his pet being hit by a car. I told them to wait in the stairwell.”

“Do you want them to come in now?”

“Let’s give the dog a few minutes to wake up. In the meantime, I’ll clean up here.”

While Erin took the towels to the clothes hamper, Pierre stuffed his tools back into his bag.

“You wouldn’t happen to have a box big enough to make a carrying case for the dog?”

Her gaze went to the Christmas tree in the living room and the boxes underneath it. The bigger one would make a perfect bed for the animal. She pointed to it. “Would that one work?” she asked.

“Perfect.” He went to retrieve it. With a twinkle in his eye, he said, “I’m glad to see you finally invited Christmas into your apartment.”

She laughed. “My secret Santa brought the tree and the decorations.”

Didi Lawson exchanged her town car for a pick-up truck and learned to operate a tractor when she and her husband moved from Arizona to a farm in  Missouri where she now weaves her tales. Her love for writing started early in  life when  she entertained her friends with her stories, won prizes for he essays in high school and wrote road shows and poems for the youth group in her church. She enjoys the outdoors, her children and ten grandchildren, and keeps an active social calendar.

Note: I am an Amazon associate and  may receive a small commission from book sales.