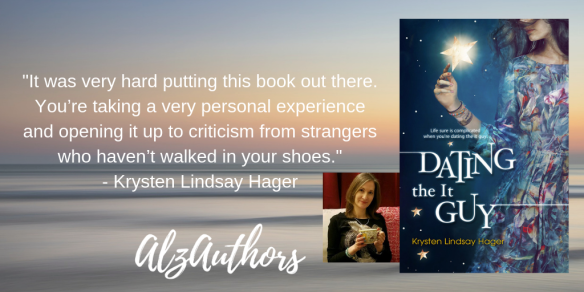 I started writing Dating the It Guy as a romance between a high school girl and the popular senior son of a senator, but I also wanted to include a storyline of having the main character deal with her grandpa’s recent dementia diagnosis. My grandfather moved in with us when I was Emme’s age because he could no longer live on his own. I decided to write about it years later just to get it out. In fact the first time I read a section of it to my mother, she left the room because it was too much to deal with. It’s tough to look back at memories like that sometimes.

So I finished the book, but set it aside for a while. Then two years ago, there was a pitch contest online and I decided to see if there would be any interest in this story. My publisher said she’d be interested in seeing it. At that time I had only published middle grade novels with her and wasn’t sure she’d want a young adult novel from me—after all there are a lot of publishers who aren’t fond of genre hopping. I remember when I sent it to my publisher I mentioned I hoped that this book would help someone else. My publisher wrote, “have I told you I love your writing?”

During the final editing process, I had my mom read the manuscript and told her, “I’m not sure you’ll like this one because it’s very personal, so be warned.” I’ll never forget her calling me and saying it was her favorite book I had written and she felt I handled those scenes with the grandpa with such sensitivity and love. She loved the sense of love and family in it and how I handled it with dignity and that meant so much.

I basically have a peace about what I wrote, but it was very hard putting this book out there. You’re taking a very personal experience and opening it up to criticism from strangers who haven’t walked in your shoes. What made it worthwhile was that the feedback on it has been wonderful as people love the humor and the family bonds. I think having the humor in it helps as that gets you through difficult times and it shows that you can continue to laugh even while going through a storm.

My main goal was wanting to show that dealing with dementia can deepen a relationship and you can love someone deeper when taking care of them. It was hard being one of my grandpa’s caregivers starting as a sophomore in high school until I was well into college, but I loved spending time with him.

Along the way,  I realized that if I went through that as a teen, then there were other teens who had taken on a caregiver role (along with their parents) to a family member. I wanted to give those teens a book that understood what they were going through. Sometimes knowing you’re not alone in a tough situation can help so much and I hope I did that for my readers.

Purchase Dating the It Guy

Who knew all those embarrassing, cringe-y moments in middle school and high school could turn into a career? And who would have thought that daydreaming in math class would pay off down the road?

​Krysten Lindsay Hager writes about friendship, self-esteem, fitting in, frenemies, crushes, fame, first loves, and values. She is the author of True Colors, Best Friends…Forever?, Next Door to a Star,  Landry in Like, Competing with the Star (The Star Series: Book 2), Dating the It Guy, and Can Dreams Come True.

For more vetted books about Alzheimer’s and dementia please visit the AlzAuthors Bookstore. Reposted with permission from AlzAuthors.