My mother, Effie Johnson, was second generation Alzheimer’s. Her mother, Emma Sue (for whom I was named) died from Alzheimer’s when she was 87 years old in 1986, in the same nursing home in Jackson, Mississippi where my mother would spend the final eight years of her life. I remember watching my mother care for “Mamaw” and wondering what our future might bring.

Twenty years later, in 2006, I moved Mother into assisted living. My father had died of cancer in 1998, leaving Mother alone. After eight years of watching her gradual decline and taking on more of her day-to-day responsibilities, especially her finances, I offered first to move her in with us—which she declined—and second to move her to Memphis to an assisted living home. She begged me to let her stay in Jackson, which I did. This meant I would spend the next ten years making the 400-mile round trip to participate in her caregiving, although she did have help, first in assisted living, and finally in a nursing home.

I never regretted leaving her in Jackson, where friends from her church would visit her, as well as friends of mine whose parents were in the same nursing home. In Memphis, she wouldn’t have known anyone but my husband and me.

Up to this point Mother’s story doesn’t sound very different than any story of a daughter dealing with an aging parent. But what’s different here is that the tangles and plaques that destroyed Mother’s brain weren’t only in her brain, but also in our relationship.

Mother had been verbally and emotionally abusive to me for most of my life. Her abuse was the catalyst for many of my mental health issues, especially eating disorders, depression, and addiction. Thankfully I am healing from most of those disorders today, at age 67. And the silver lining behind Mother’s Alzheimer’s is that at some point the disease took away the part of her memory that was abusive. She forgot how to judge and criticize, and became very loving in the final stages of the disease.

I had these words published in Smith’s Six Word Memoirs during that time: “The upside of Alzheimer’s: new mother.” During the years that I was making those trips to Jackson to visit Mother—first weekly, then every other week, and in the final years, monthly—I was also starting a late-life career as a writer. I was publishing essays in various journals and anthologies, and working on a novel. In 2007 I started a blog. For a number of years the blog followed themes: “Mental Health Monday,” “Writing on Wednesday,” and “Faith on Friday.” I wrote about everything from sexual abuse and eating disorders to spirituality, art, and writing. And yes, about my mother’s Alzheimer’s and our relationship. In fact, I published 60 posts about mother between 2008 and 2016, the year she died.

I received a lot of positive feedback on the blog, and one reader suggested that I publish the posts about my mother as a book. Tangles and Plaques: A Mother and Daughter Face Alzheimer’s is ultimately a love letter to my mother. It’s about forgiveness—which I was able to give before she forgot who I was, thankfully. Of course it contains sad stories about difficult struggles, but it’s also full of humor and grace. Mother died in May of 2016. No more tangles and plaques. For her. 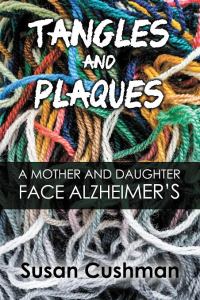 “Susan Cushman is not only an accomplished writer, but she tackles a brutal topic with candor and honesty. Madness awaits us all. I pray I can confront it with equal faith and vulnerability.” —Neil White, author of In the Sanctuary of Outcasts

“Cushman has written a new kind of love story, one that speaks to the very real concerns of a generation. In this true story of a daughter’s love for her aging mother within the daily trials of caregiving, we read ourselves, our families, and the ways that our losses shape who we become and how we choose to remember.” —Jessica Handler, author of Braving the Fire: A Guide to Writing About Grief and Loss

In addition to Tangles and Plaques: A Mother and Daughter Face Alzheimer’s, Susan Cushman is author of a novel, Cherry Bomb (2017), and editor of two anthologies—A Second Blooming: Becoming the Women We Are Meant to Be (2017) and Southern Writers on Writing (2018). Her essays have been published in numerous journals and anthologies. She is a regular workshop leader and conference speaker. She has three grown children, four granddaughters, and fifteen Godchildren in the Orthodox Church of which she is a member. A native of Jackson, Mississippi, she has lived in Memphis since 1988.

For more extraordinary books about Alzheimer’s and dementia

Reposted with permission of AlzAuthors, the global community of authors

and readers whose lives have been touched by Alzheimer’s and dementia.

I am a co-founder and admin.