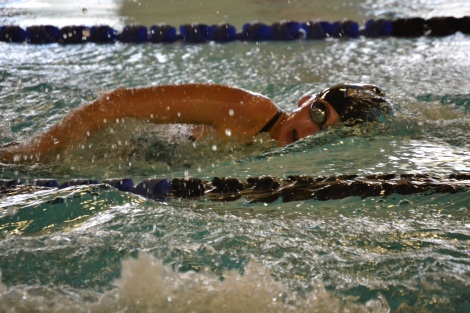 My daughter had been swimming competitively for five years when I came up with the idea to write a novel about girls’ varsity swimming. Sitting on those cold, hard bleachers season after season gave me more than a sore you-know-what. It sparked my imagination, creating a story line and cast of characters that would show in written form what high school swimming is like for these girls. As I wrote the story, they were always at the heart of it. I wrote it for them. And I wanted it to be as accurate and realistic as possible.

In many ways, writing Swim Season was natural and easy. Through many autumns, I’d watched my daughter and her team swim their hearts out, beside parents rooting for their own swimmers. In the beginning, I knew next to nothing about the sport, about swim meets. But as the years went on, I learned.

I learned simple things, like the order of events. Try finding your kid on a pool deck swarming with dozens of young swimmers in caps and goggles when you’re not sure which event it is, or whether your child is swimming in it or not. Impossible.

I chaperoned the waiting rooms where dozens of youngsters waited for their next event. Try to keep all that adrenaline in check.

I volunteered to time the races, and stood at the blocks, race after race, helping to make things run smoothly, making sure the right kid was in the right lane.

I helped out at the concession stand, serving up bagels and cream cheese.

I was involved with the fundraising activities, Picture Day, and put together the program for Senior Night for a number of years.

I went to 99 percent of the meets with my husband (we missed one when it was an hour away from our home on a week night.)

Most of my daughters’ friends were swimmers, so I got to know several of them up close and personal. They were an intelligent, ambitious, fantastic set of young women. When my book was criticized by a critique partner because the characters seemed “too smart,” I responded with, “Well, those are the girls I know.” The team had the highest GPA of all athletic teams at the high school year after year. Yes, swimmers are smart.

I took advantage of coaches I knew personally (and some I didn’t) to pick their brains, try out the story’s premise for believability, and tweak the details.

Early in the process, I sent out a tweet on Twitter, asking swimmers to complete a questionnaire for a new book about varsity swimming. Almost a dozen young swimmers – girls and boys –  responded, and we started dialogues that provided great background for my story. Some of them went on to become beta readers. All of them were thrilled at the idea of a book about them, about their sport.

As a reader, when the answers weren’t so simple I resorted to books. Michael Phelps’ biography No Limits: The Will to Succeed, with Alan Abrahamson, was more than worth its cost. Likewise, Amanda Beard’s memoir In the Water They Can’t See You Cry gave me insight into how to build an Olympic silver medalist. Instruction books, such as Terry Laughlin’s Total Immersion, with John Delves, and Tracey McFarlane’s Mirande’s Championship Swimming with Kathlene Bissell, taught me the fine-tuning of technique. The Champion’s Mind: How Great Athletes Think, Train, and Thrive, by Jim Afremow, PhD, was instrumental in creating my heroine Aerin’s mental game. For inspiration I turned to Swimmers: Courage and Triumph by Larry Thomson.

Then there was the time when I decided to swim the race at the heart of my story. For a while I was taking Aquasize classes at my local YMCA. One day I got the idea to try to swim 500 yards. I wanted to see if I could do it, how long it would take, and how I would feel during and afterwards. I have never swum competitively, although I have always loved to swim and am capable of doing the freestyle. My first 500 clocked in at 30 minutes. I stopped after every length to catch my breath and chat with the other ladies in the Aquasize class. I kept at it, though, and after a few weeks managed to complete the 500 in 16 minutes, which was phenomenal for me. Of course, the time to beat in Swim Season is 4:52.50, which, for me, was in never never land. But, as a middle-aged woman with below-average fitness I was proud of my achievement. In the end, unfortunately, it exacerbated my thoracic outlet syndrome and I had to give it up.

Writing Swim Season was an endeavor born of many resources, personal and professional. It’s recommended that we write what we know. I knew a lot about competitive swimming as a Swim Mom, but that was not enough to compose this story. I needed to reach out to many others – swimmers, coaches, parents, Olympians, and a psychologist – to nail the details. All of this, I believe, leads to a more credible, believable story with depth.

Swim Season is available in paperback. Kindle, and audiobook on Amazon.

1 thought on “The Writing Life: Write What You Know and Then Some – Researching My Young Adult Novel “Swim Season””