About ten years ago my life took a turn. I guess you would say it took a turn for the worse, but really, it just changed. I was in my mid-twenties, living in London and working in fashion. My father  was diagnosed with Alzheimer’s in his early 60s, and within the year, I had moved back to small-town south Wales to help my mum look after him.

His decline was swift, his actions included (at the start) repetition of stories, misplacing items, and accidentally putting on Mum’s cardigan to go to the shops – so far, standard! He had really mellowed and was fairly stoic and philosophical about the illness, often making jokes about his forgetfulness, even though it must have been terrifying for him. Then life took a turn for the “even worse.” Mum was diagnosed with terminal cancer and passed away just three months after I moved home. The effect this had on dad was profound and catastrophic. The seismic shift in the family dynamic tipped him right over the edge. By this point, my older brother was also in residence, but still we couldn’t give dad the level of care he needed. One day he mistook me for a burglar and came at me with a knife. It was at this point that we had to seek more help and Dad went into a care home.

When he passed away in that April, my brother and I were broken, exhausted, emotionally crippled, but relieved. We are not a religious family, but I took solace from thinking that he and Mum were together again, somewhere kinder, somewhere brighter. 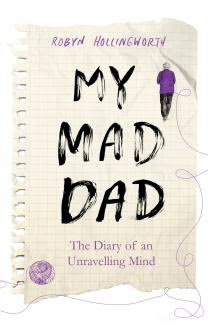 I didn’t talk much about my experiences at the time. I had attended a local support group a few times, but really, I just kept it all to myself. There wasn’t the social media presence there is nowadays, where you can log on and speak to a whole host of people around the world, sharing opinions, experiences and support. So I kept my little private journal. It was never intended to be read by anyone, but last year I tentatively thought about putting it “out there.” The response I have received to My Mad Dad has been overwhelming. Complete strangers send me messages to tell me about their stories and how common a lot of the things I went through are.

Though I felt alone a lot of the time, I don’t feel so alone any more. What I went through, sadly, isn’t unique and it isn’t unusual. So many people in the world right now are caring for a loved one with Alzheimer’s and it’s a tough gig! I got through it with humour, trying to see the little glimmer of light in the darkest of times, like Dad telling people to F$$$ off at the most inappropriate of moments, trying to order Chinese food at 8:30 on a Tuesday morning, or thinking it was Christmas when it wasn’t. And that’s okay, each and every one of us has our own coping mechanisms.

Overall, if I were to impart any advice, it would be to talk. It’s good to talk. Let people know how you are; you count too. It’s okay to feel frustrated, angry and hurt, but its okay to smile too. There are always reasons to smile.

Robyn Hollingworth is a reformed fashion buyer/merchandiser who has worked for some of the most famous names in luxury design and retail. During her father’s struggle with dementia, she took a sabbatical from work to care for him, during which time she kept an open and frank diary which was published in April, 2018. The book deals with themes of caring, love, loss and totally inappropriate humor. Though new to the literary world, she has plans to write more. Robyn lives in South West London.