Reluctant Cassandra came to me first as a title. I’ve always been fascinated by Greek mythology and especially with the character of Cassandra. She was given the gift of prophecy along with the curse that her warnings would never be believed. In Greek mythology, Cassandra’s story ends with the fall of Troy—a tragedy she foresaw but was unable to prevent.

What would it be like to see the future and still be helpless to change the outcome? Unfortunately, I’ve lived that experience. Many of us have. When I wrote my own version of a modern-day Cassandra story, I imagined a woman whose father had been diagnosed with Alzheimer’s. She could see clearly that his health was deteriorating, but it was still so hard for her and her family to accept the future that was unfolding. 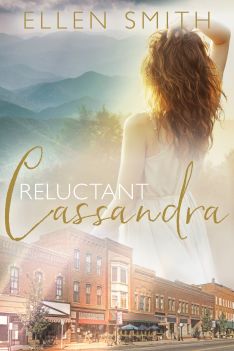 The journey that my characters took through anticipatory grief was very similar to what I had just been through in my personal life. I actually wrote Reluctant Cassandra the year after I lost my son. Living through his diagnosis and passing was a heartbreak I hadn’t been able to put into words, but when I stepped into this fictional world, the pain of my own Cassandra experience poured out.

While writing Reluctant Cassandra was cathartic, the story continued to take on a life of its own after publication. Only a week after my release date, I received my first letter from a reader. She had connected strongly with the story because it mirrored her own experience after her father was diagnosed with Alzheimer’s. I was so touched that she reached out to share that with me—in fact, I still have her email printed out and pinned over my desk! Her letter was later joined by more notes from other members of the Alzheimer’s community. Here I had written this story at a time when I felt so alone and now it was connecting with readers from all over.

This is the true gift of a story: it reaches across the barriers of time and place and circumstance and allows us to connect with each other. The Greek myth of Cassandra was first told hundreds of years ago, and yet the story still impacted me as a 21st century reader. My novel was inspired by a grief I couldn’t put in to words, but writing this story allowed me to become a part of the Alzheimer’s community. I could never have imagined where the book would lead me when I first thought of the title years ago. I am beyond grateful that it brought me here.

Ellen Smith is the author of Reluctant Cassandra, Every Last Minute, and the Channillo for Charity series Ghosts of Eagle Valley, which benefits the Alzheimer’s Association. When she isn’t busy writing, Ellen can usually be found reading, crafting, or playing piano. No matter what she is doing, Ellen is always wondering, “What if?” Ellen lives with her family near Washington, DC.