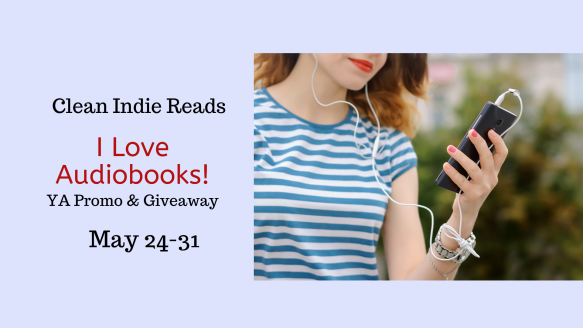 Summer will soon be upon us and that means more time to read!

But if you’re active you may not want to sit around with a book.

Audiobooks are perfect for people on the go. You can listen to a great story while on the road – they’re terrific for long drives – or while lounging in the pool or on a hammock, taking long walks, even mowing the lawn.

Here is a collection of great Young Adult titles from Clean Indie Reads authors for your listening pleasure. We offer a variety of genres: sports, paranormal, fantasy, historical fiction, thriller, romance, and more. Peruse the selections, purchase from Amazon or Audible, then enter our raffle to win a free book.

How do you do audiobooks?

Aerin is destined for the Olympics, but she’s quit winning.

It costs too much.

Her dad left and her mom’s in jail. 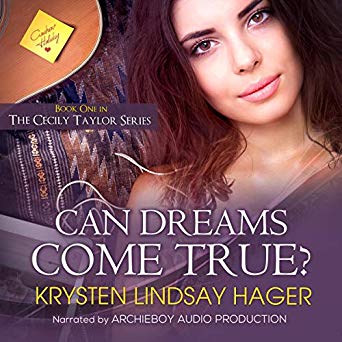 Cecily has always had a huge crush on singer Andrew Holiday, and she wants to be an actress, so she tags along when her friends audition for his new video. However, the director isn’t looking for an actress, but rather the girl next door – and so is Andrew.

Cecily gets a part in the video and all of Andrew’s attention on the set. Her friend begins to see red, and Cecily’s boyfriend is seeing green – as in major jealousy. A misunderstanding leaves Cecily and her boyfriend on the outs, and Andrew hopes to pick up the pieces, as he’s looking for someone more stable in his life than the models he’s dated.

Soon, Cecily begins to realize Andrew understands her more than her small-town boyfriend – but can her perfect love match really be her favorite rock star? 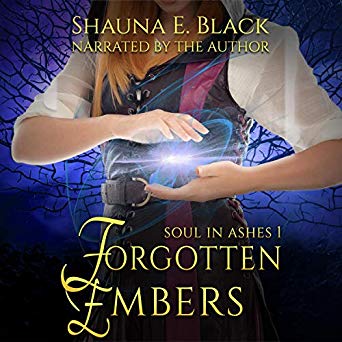 The price of peace.

As an exile studying the healing arts in a foreign land, Alswyn hides the details of her troubled past and the true reason she was banished from her homeland.

But when the king’s foreign bride falls prey to a mysterious illness, Alswyn must face the man who ordered her exile and use her knowledge of dark magic to catch a sorcerer before the countryside is plunged back into a bitter war.

Unfortunately, digging up the bones of Alswyn’s past may well prove fatal to her soul.

Fans of The Black Mage and Soulfinders will discover a new adventure full of forbidden magic, manipulating gods, and tainted romance. 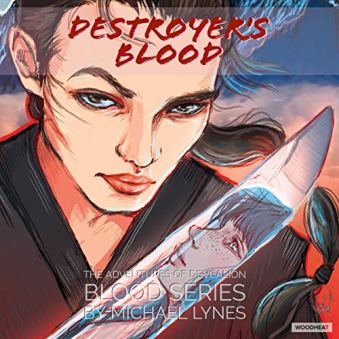 Dev shook his head, spitting out dust and rock chips. The last rays of the setting sun stained the ground crimson. “Betrayer,” he murmured, ears still ringing from the terrific explosion, “we have a problem.” The cryptic message from Olympus changes everything…. One moment, Devcalion and Betrayer are free, climbing up Half Dome without a care in the world, the next, they are dragged into battle with the Destroyer, Zeus’ ancient foe. The dark power is merciless, and time is running out. It’s up to Dev and Tray to try to stop him, or the world of men and gods is doomed. Destroyer’s Blood – Audible audiobook – book one of the Blood series: a fantasy novel by award-winning author Michael Lynes. 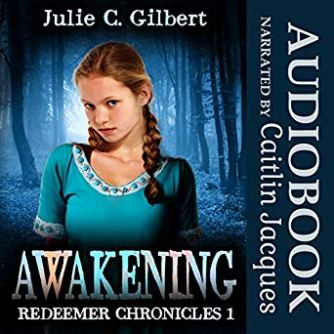 Being the Chosen One could kill her….

Victoria Saveron knows two things for certain. Dark forces want to kill her, and her friends have cooler powers than she does. Katrina can shapeshift and Tellen can tap into destructive magic currents.

Everything else is uncertain and rumors abound.

Victoria might be the Chosen One, whatever that means. Her father might be able to help them, but only if they can find him. Coldhaven’s villagers might be able to offer them food and shelter. Some fool might be running around unlocking Darkland portals to raise an undead army.

The further Victoria and her companions get on their journey, the more dangers and betrayals they face. They must awaken Vic’s true powers or forfeit the world. 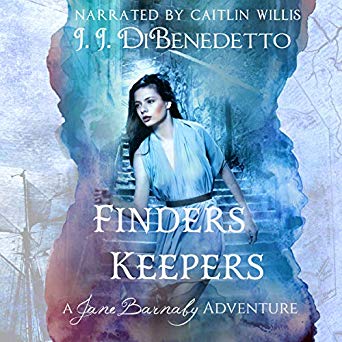 All archaeology student Jane Barnaby had to do was deliver a box of pottery shards to her professor at his dig site, along with his new car. Yes, his office was in Oxfordshire, and his dig site was in Spain, a trip of 1,400 miles across three countries and two bodies of water. Still, it should have been simple. That is, until everything went wrong. Now, Jane has the wrong box and is being chased by thieves who want it and aren’t particular about how they get what they want. Add to that, she’s picked up a pair of passengers who both claim they can help her get her professor’s pottery back and return the artifacts to their rightful owner. If only she knew who was working with the thieves and who she can trust in this high-stakes game of finders keepers. 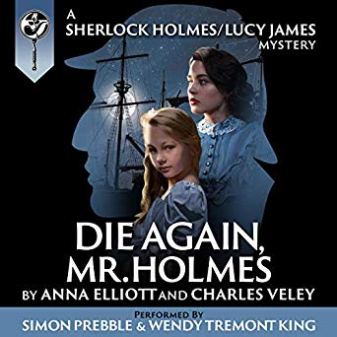 By Anna Elliott and Charles Veley

A young woman begs Sherlock Holmes to help find her missing fiancé, but the great detective makes an uncharacteristic mistake. Then Sherlock’s daughter, Lucy James, takes on a missing-person case of her own, but she must also keep a vicious criminal away from Becky, Lucy’s 10-year-old sister-in-law. Little Becky soon becomes dangerously involved in both cases. No one foresees the devastating news that Sherlock Holmes has been murdered.

The newest adventure in this popular mystery series takes us from the Old Bailey courthouse and the seacoast lairs of smugglers to a grand British country estate and the posh financial headquarters of Lloyd’s of London. For Watson, Sherlock, and Lucy, survival will require valor, sacrifice, and acts that go far, far outside the law. 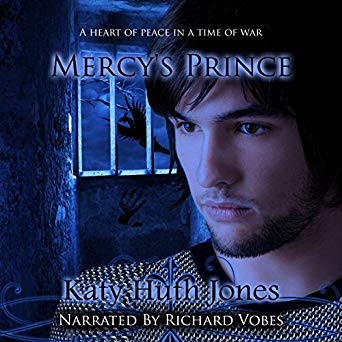 By Katy Huth Jones
Narrated by Richard Vobes
After Valerian is forced to become Crown Prince, he meets Mercy the Healer, and their lives and the land’s destiny become as entwined as her pacifist’s braid.
Listening time:  15 hours and 34 minutes
Available on Amazon Audible 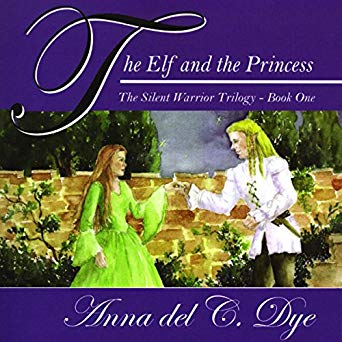 The Elf and The Princess: The Silent Warrior Trilogy, Book 1

Narrated by George Tintura
Adren, the last princess of Menarm, finds herself alone in a world where women live in the shadows of men. Not only must she battle her enemies, but also a truth that could obliterate her last hope for happiness and bring dishonor to all those whom she hold dear.
Listening time: 6 hours and 57 minutes
Available on Amazon Audible 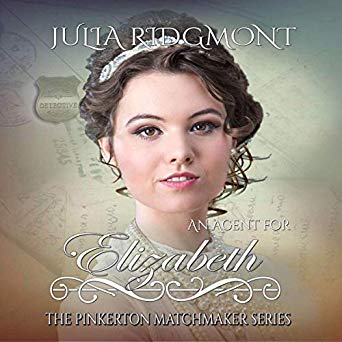 An Agent for Elizabeth: The Pinkerton Matchmaker, Book 7

Life for 18-year-old Elizabeth Stone was going smoothly until her mother died and the man she’d been in love with for years suddenly disappeared. Now he’s back in town, but only for a short visit, and he still thinks of her as a kid sister. What will it take to make him notice her as a woman?

Tainted by his undercover work, Pinkerton agent Stephen Randall wants what is best for his childhood friend–and it isn’t him. Brushing off Beth’s advances seems like the best plan. That is, until she is mistaken for a female outlaw wanted for robbery and murder. Now they must work together to find her nemesis and clear her name, and the only way to do that is for Beth to become a Pinkerton agent herself–and marry Stephen. But with the case–and their attraction–heating up, will Stephen realize his love for Elizabeth in time to save her?

Thank you for visiting our audiobook sale! Happy listening!

To learn about future book sales and giveaways please subscribe to my newsletter.

6 thoughts on “Kick Start Your Summer Reading With 10 Popular YA Audiobooks Plus a Giveaway!”